The genius of generosity (and confirmation that Jonathan is a hillbilly)

If you didn’t listen to the entire episode including listening after the outro at the end, you missed the best part of the podcast.

Thanks to John Smyth for being on our podcast today. To get more information about John click here

This topic was taken from a great book by Chip Ingram.  If you want it click here

There is joy in generosity. What is the most generous thing that anyone has done for you or someone close to you?

Jackie is a wedding coordinator but she is a fashion designer as well. When Jackie found out about our adoption she suggested that we do a fashion show fundraiser to raise money for our adoption. I had no idea what that would look like but I said “sounds great. Let’s do it.” This is what it looked like. Jackie catered the whole event. She brought in a video game truck for the kids. She organized a fashion show with our high school kids. She should her designs and gave the proceeds to the adoption. Our friend party asked if she could run a silent auction and we said yes to that. At the end of the day, this wedding coordinator that I barely knew had raised $13000 for our adoption.

Years ago my daughter and I went to a golf tournament. Before we left we had to see Tiger Woods just once. This was pre-scandal Tiger Woods. She didn’t know anything about golf but she did know Tiger Woods. So we waited with the crowds behind the ropes that separated the green and the next fairway. After Tiger drained his put he handed his ball to his caddy Steve Williams. Then Steve handed the ball to my daughter. She was so stunned she didn’t know what to do. I tried to take it for her and Tigers caddy gave the greatest stink face of all time. Finally Paige took it and we went home. We were both thrilled. It was a prized possession. The next Christmas when our family was around the Christmas tree opening gifts, my daughter handed my son a small box. You can probably guess what was in the box, right? It was the Tiger Woods ball. It was a thrill to have my daughter get that ball. It was more of a thrill watch her generously give one of her prized possessions to my son.

The generous will themselves be blessed, for they share their food with the poor. Proverbs 22:9

The wicked borrow and do not repay, but the righteous give generously;22 those the Lord blesses will inherit the land, but those he curses will be destroyed. I was young and now I am old, yet I have never seen the righteous forsaken or their children begging bread. 26 They are always generous and lend freely; their children will be a blessing. Psalm 37:21,22,25,26

I love these stories of generosity. I think we all would like to have more of these things happen in our lives. I think most of us would like to be able to be generous to the people around them.

If generosity is so great, why isn’t it more a part of our lives?

I believe that generosity is not just a money issue. It’s an attitude issue. Generosity needs to be practiced. There needs to be a heart change.

Alfred D. Souza once said, “For a long time it had seemed to me that life was about to begin – real life. But there was always some obstacle in the way, something to be gotten through first, some unfinished business, time still to be served, a debt to be paid. Then life would begin. At last it dawned on me that these obstacles were my life.”

A recent census study confirms that a little bit more is the goal of most Americans. When polled, Americans with household incomes under $25,000, it would take $54,000 a year to fulfill the American dream. Those who make $100,000 crave an average of $192,000. In other words, the American Dream usually lies nearly twice the distance away.

John Cheever writes “The main emotion of the average adult American who has all the advantages of wealth, education and culture is disappointment”

Whoever loves money never has enough; whoever loves wealth is never satisfied with their income. Ecclesiastes 5:10

Luke 12:15″A man’s life does not consist in the abundance of his possessions.”

Where does contentment fit in this discussion of generosity?

: the quality or state of being contented

All day long we are bombarded with messages that seek to persuade us of two things: that we are (or ought to be) discontented and that contentment is only one step away:“use me, buy me, eat me, wear me, try me, drive me, put me in your hair.”The things you can buy for hair contentment alone are staggering: You can wash it, condition it, mousse it, dye it, curl it, straighten it, wax it if it’s growing where it shouldn’t, and Rogaine it if it’s not growing where it should. People are healthier, cleaner, richer, and better informed than ever. We live longer, eat better, dress warmer, work less, and play more than ever in the history of the human race. But are we happier? Or are we just cleaner, healthier, better-coifed discontents? The desperate chase after whatever Happy Meal we were pursuing turns out to have been a trivial pursuit. — Love Beyond Reason (John Ortberg)

Good will come to those who are generous and lend freely, who conduct their affairs with justice… They have freely scattered their gifts to the poor, their righteousness endures forever; their horn will be lifted high in honor. Psalm 112:5,9

A generous person will prosper; whoever refreshes others will be refreshed. Proverbs 11:25

Here is the closest we could find to Jonathan’s car growing up.  The only difference is the panels on this car match 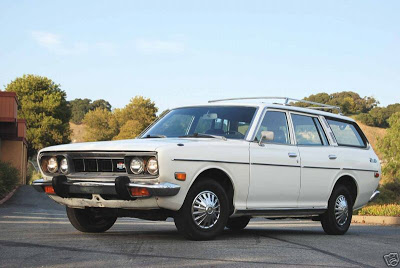