What are the advantages of going small?

“A person’s a person no matter how small” podcast notes

Moment’s after this podcast I met a couple of homeless guys that needed lunch. Couldn’t help reaching out to Jonathan and Lesley afterward.  Here’s our text chain 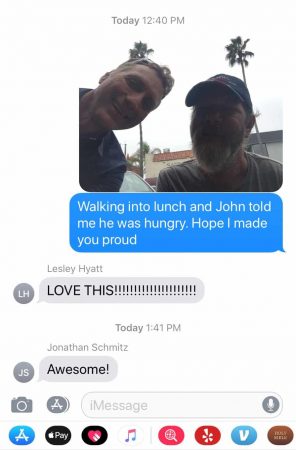 This podcast sounds like a Dr. Seuss book doesn’t it. It’s actually based on one of the most famous things that Jesus said, but let’s go with the Dr. Seuss theme for a second. I feel like I’ve finally found some books that Jonathan may have read.

Do you have a favorite Dr. Seuss book?

Here’s another fact about Dr. Seuss. His name is actually pronounced Soice. It was his mother’s maiden name.

While at Dartmouth, he was caught drinking gin with nine friends in his room and was suspended from all extracurricular activities, including the college humor magazine.  To continue work on the college paper without the administration’s knowledge, Geisel began signing his work with the pen name “Seuss”

Dr. Seuss famously stated that he never began writing a story with a moral in mind. Kids can see a moral coming a mile off, he said.  But you can’t escape the fact that his books are filled with bits of truth and life lessons that we all need to be reminded of.

Dr. Seuss on commitment
I meant what I said and I said what I meant. An elephants faithful 100%

Dr. Seuss on differences
The day they decided that Sneetches are Sneetches / And no kind of Sneetch is the best on the beaches.

Here’s my favorite
Even though you can’t see or hear them at all
A person’s a person, no matter how small.

That one line has incredible meaning for all of us.  It had great meaning for Dr. Seuss.  It marked a 180 degree shift in Dr. Seuss’ life and attitudes.  I will get to that story later. That statement speaks of a lifestyle shift we all need to think.  I believe it is not only a good idea, but it is a call from God.

Those are the people that God loves.

‘Truly I tell you, whatever you did for one of the least of these brothers and sisters of mine, you did for me.’ Matthew 25:40

Does this story make it seem like if you do the right things you’ll get into heaven?

The word least means “small.”  A person’s a person no matter how small.

This word covers a lot of different kinds of small.

What kind of people would you consider least or small?

It means small in size.
Small in importance.
Small in authority.
Small in rank.
Here’s a good one.  Small in the estimation of men.

What you do for the least is important.  In fact it’s very important.  When Jesus left the world he told us this is what we are to be about.
Our job is to care for the least.
To reach out to them all.
A persons a person
no matter how small.

Turns out this is a global shift for us.  Most of us spend our life trying to get away from small.  We don’t want to be the least.  We want to be the most.  The best.  The most influential.  The most athletic. The most popular.  The most worthy.  To get to that spot we need to align ourselves with people who are the most and the best not the smallest and the least. We want to hang out with the most popular crowd. We want to rub elbows with the most successful.  We want to stay Linkedin.  We want more Facebook friends.  More likes.  More followers.  We call it networking.  This just comes natural to us.

That one took place at Souplantation.  The ceremony was in the back room and the reception included all you can eat soup and salad and soft serve ice cream.  I’ve tried to talk my daughter into that venue for her wedding but she’s not interested.

As a people, generally speaking, we aren’t attracted to the least.  Our first thought isn’t to talk about the small.  We want to talk about the most famous person we know and the most influential person. We want to rub elbows with the brightest and best.  Those are the people who make it on our resume’s.  It’s our nature.

Jesus prioritized little children. He valued them in a society that didn’t
Jesus honored women in a culture that viewed them as second class
Jesus told us to take care of widows and orphans. That’s how you will be judged.
He told us to care for the homeless and the hungry.
Jesus lived in a culture that deemed certain races as lower than others.  Jesus told us to love them all, but pay special attention to the small.

What are the advantages of going small? Focusing on the least?

Going small will change the way you think.  It did for Dr. Seuss.  Let me explain.  I want to close by reading a line from the book Horton Hears a Who that I’m guessing you haven’t ever read.  It’s stuck in the front with the copyright information and the print date.

It reads simply The book is dedicated to “My Great Friend, Mitsugi Nakamura of Kyoto, Japan.”

You may or may not have known that from 1941-1943, Theodor Seuss Geisel, a.k.a. Dr. Seuss, drew over 400 political cartoons for the newspaper PM. Among them were racist portrayals of Japanese people with slant-eyes, pig-noses, and coke-bottle glasses. Google them if you are interested.

When readers complained about these depictions, Dr. Seuss wrote back saying, “But right now, when the Japs are planting their hatchets in our skulls, it seems like a hell of a time for us to smile and warble: ‘Brothers!’ It is a rather flabby battlecry. If we want to win, we’ve got to kill Japs…We can get palsy-walsy afterward with those that are left.”

Then in 1953, Dr. Seuss visited Japan to research an article for Life magazine. He wanted to write about the effects of the war and post-war efforts on Japanese children. With the help of Mitsugi Nakamura, dean of Doshisha University in Kyoto, Seuss went to schools all over Japan and asked kids to draw what they wanted to be when they grew up. What Seuss saw made a deep impression, and when he returned to America, he started work on Horton Hears A Who! The book is dedicated Nakamura. He said in an interview, “Japan was just emerging, the people were voting for the first time, running their own lives—and the theme was obvious: ‘A person’s a person, no matter how small,’ though I don’t know how I ended up using elephants.”

Whatever you did for one of the least of these brothers and sisters of mine, you did for me