Lessons from 56 years of living

Note to students. When my son turned 13 I asked the influential men in his life to give him some advice. This is what they came up with

Embrace your imperfection.  Go bowling once in a while just so you know that you’re not good at everything.

When you go away to college walk right past the guys offering you a sweatshirt to sign up for a credit card.

It’s OK to be alone sometimes (except in the carpool lane).

Life is too short to eat at Carl’s junior. Open your yelp app and find the best local restaurant and order what’s most popular. It will be better than the western bacon cheeseburger

Ask your parents opinions about important decisions.  Yes, they are hopelessly uncool, but they are both smart people and they believe in you more than any other two people in the entire world

Dating the prettiest girl in the room isn’t always the smartest idea – unless your mother or my wife is reading this.

Be nice to animals. Especially chicken, steak and bacon.

There will always be someone taller, faster, stronger, smarter, richer, funnier and better looking. That shouldn’t stop us from being friends.

Put your phone in your pocket as you walk between classes.  If you don’t you might miss the girl of your dreams and/or a lamppost.

Always order the small beverage at an all-you-can-drink place. It’s ALL YOU CAN DRINK.

Be on the lookout for someone to encourage

Years ago my wife was gone speaking at some women’s retreat so I took my kids to TGI Fridays. During our visit we got a waitress who was really attentive. She went out of her way to make our visit a great one. So, just before we left, I asked her if I could see the manager. That kinda freaked her out, and understandably so. We all know what it means when someone asks for a manager. They expect whining. In a few minutes a manager with a similarly stunned look came to my table expecting to hear my complaint. But rather than complaining, I went on and on about how great our waitress was. I took the time to encourage her.

I drove away and I was feeling really good about myself. “Jack, you’re such a great guy. What an encourager.” I was patting myself on the back pretty good when I suddenly realized that I was so impressed with myself that I had forgotten to give her a tip. I stiffed her. I know that waitress must have been thinking “Let me tell you were you can put your compliment.” I had to make the walk of shame to go back in and leave a tip.

We pursue the things which make for peace and the building up of one another. Romans 14:19

Mark Twain said, “I can live for a week off one good compliment.”
William James, the father of modern psychology, said, “The deepest principle in human nature is the craving to be appreciated.”
George Adams said, “Encouragement is the oxygen of the soul.”

We are drawn to environments of acceptance, Andy Stanley

Several years ago when I was just starting out in youth ministry, I had a kid in my youth group that I’ll never forget. He was a great kid, but what I remember the most was that he had the squeakest voice I’d ever heard. He used to talk like this. He had Peter Brady voice, but he had it all the time. As a youth pastor, I wanted to be sensitive to this kid, so I tried to overlook his shortcoming. However, I was at a ball game with Chris and some other kids when one, insensitive kid said, “So Chris, whats wrong with your voice.” He told me a story I would never forget. He said that in junior high he was on the baseball team and before practice the team would warm up on the field by running around the track. Chris was faster than the rest of the team so he raced ahead. Unfortunately he did not see the steel cable that had been set up to keep motorcycles off the field. Chris ran into the cable at full force and the cable hit him across the neck. His vocal chords were damaged and doctors thought he might always talk like that. Let me ask you a question. If you knew Chris, would you see his potential. Would you see him through the eyes of God and realize that the skies the limit? That’s what God calls us to, because he’s capable of anything. After I left that youth group I heard a stories about Chris. When he was in high school he got a cold and things went from bad to worse. He lost his voice completely. When he got over the cold, however, his squeakly voice had been replaced by a big, booming voice. Several years after that Chris graduated with a degree in, get this, sports broadcasting. He was one of only a handful of students chosen to work on an announcers team at the Olympics.

The story is told of a little second grade boy who was trying out for a part in the school play. The day came for the auditions and his mother took him to school and waited for him to come out. She was nervous because she knew he couldn’t sing, couldn’t act, couldn’t dance, and couldn’t memorize very well. So she was surprised when he came out after 45 minutes with a big smile on his face. “How did it go, honey?” “It was great, Mom. Guess what? I’ve been chosen to clap and cheer.”

This frame on my desk is a constant reminder from my daughter that 1) I’m not perfect, 2) embrace it! 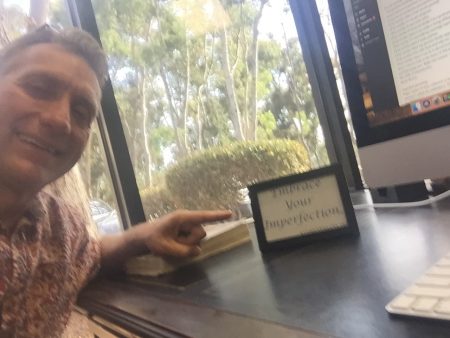 Imperfect parenting
Edgar, father of nine, reflected on how he had mellowed over the years: “When the firstborn coughed or sneezed, I called the ambulance. When the last one swallowed a dime, I just told him it was coming out of his allowance.”

The most perfect person in the world did not gain unanimous acceptance. He was killed for his perfection.

Be ready to seize an opportunity when it becomes available

“Jack, you have never been more like me than when you saw the need of this young girl and you stepped up.” God clearly wants us to pray. He wants us to ask what he wants. But that’s not all he wants. Once he calls, he wants us to step up and seize the opportunity

Learn to not just pray but to listen

“More than half a century ago, Dr. Alfred Tomatis was confronted with the most curious case of his fifty-year career as an otolaryngologist. A renowned opera singer had mysteriously lost his ability to hit certain notes even though those notes were well within his vocal range. He had been to other ear, nose, and throat specialists, all of whom thought it was a vocal problem. Dr. Tomatis thought otherwise. Using a sonometer, Dr. Tomatis discovered that even an average opera singer produces 140-decibel sound waves at a meter’s distance.1 That’s slightly louder than a military jet taking off from an aircraft carrier. And the sound is even louder inside one’s skull. That discovery led to a diagnosis: the opera singer had been deafened by the sound of his own voice. Selective muteness was caused by selective deafness. If you can’t hear a note, you can’t sing that note. In Dr. Tomatis’s words, “The voice can only reproduce what the ear can hear.” The French Academy of Medicine dubbed it the Tomatis effect. I’m guessing you, like me, have your fair share of problems. And your problem-solving techniques might be as effective as mine, which isn’t very. Maybe that’s because we’re treating symptoms while ignoring the root cause: a spiritual Tomatis effect. Is it possible that what we perceive to be relational, emotional, and spiritual problems are actually hearing problems—ears that have been deafened to the voice of God”

Insomnia is not an appointment with Sportscenter

Moreover, when God gives someone wealth and possessions, and the ability to enjoy them, to accept their lot and be happy in their toil—this is a gift of God. They seldom reflect on the days of their life, because God keeps them occupied with gladness of heart. Ecclesiastes 5:19-20