Only God can change your origin story

Each superhero movies has one thing in common. They all have an origin story.

To make it more fun I’ll give you a few specifics of the origin story and you tell me who the character is. We’ll start easy

He struggled with social interactions, suffered from bullying, and lead an uninteresting home life anchored by his loving aunt and uncle. All of that changed, however, when he was bitten by a radioactive spider while on a scientific field trip. Spiderman

As a young boy, his parents came face-to-face with an armed mugger after leaving a movie theater through an alley. After a scuffle, the thief panicked, firing his gun twice, and killing both of his parents. Inheriting his parents’ vast fortune, he dedicated the next portion of his life to becoming the perfect weapon against crime and criminals. Batman

After being taken prisoner he was forced to use his skills as an arms designer to build a weapon of mass destruction. Kept alive only by the treatments given to him by his captors after shrapnel lodged near his heart he had little choice but to obey. He instead used the materials to build a suit of nearly invincible armor loaded with weapons. Ironman.

A good origin story has difficulty and hardship. The more barriers the character faced early on, the better the story. This is not only true of comic book heroes but real life people as well. See if you can name this real life super hero.

His grandfather was killed in an Indian raid. His father witnessed the attack. His father then moved to Kentucky were he took on odd jobs. He disliked the hard labor associated with frontier life and was considered lazy by neighbors and family members for all his “reading, scribbling, ciphering, and writing Poetry, done to avoid manual labor. He preferred to stay home in the one room log cabin he was born in on the Sinking Spring Farm in Hardin County, Kentucky. Abraham Lincoln

I have one more origin story I want to read to you. See if you can name this last super hero.

She was born in Kosciusko, Mississippi, to an unmarried teenage mother. It was a single sexual encounter and the couple broke up not long after. Her mother, was a housemaid. After her birth, her mother traveled north and they spent her first six years living in rural poverty with her grandmother. She was so poor that she often wore dresses made of potato sacks, for which the local children made fun of her. Her grandmother taught her to read before the age of three and took her to the local church, where she was nicknamed “The Preacher” for her ability to recite Bible verses. When she was a child, her grandmother would hit her with a stick when she did not do chores or if she misbehaved in any way. Any guesses? Oprah Winfrey. By the way, Oprah was named “Orpah” on her birth certificate after the biblical figure in the Book of Ruth, but people mispronounced it regularly and “Oprah” stuck.

That’s an amazing story. All the best stories begin with an against all odds origin story. Some of you have a tough origin story.

Your life was cruising along until one day your dad sat you down and said, “You’re mom and I are getting a divorce.” You can still remember the details of that day like you remember 9/11. You just wanted a happy family, but you got a difficult origin story

You went to a party and someone offered you a beer. It seemed harmless, but what you didn’t realize is that was the beginning of a lifetime of addiction. All you wanted to do was fit in. Instead you got an origin story.

You were born into a family of alcohol. The days you should have been laughing and playing and just being a kid, you were hiding. You cowered in your bedroom with your hands over your ears so that you didn’t hear the yelling. If that was your origin story, then we have something in common because that’s my origin story.

As for you, you were dead in your transgressions and sins,

You were dead. I have a buddy who this is his origin story. His name is Brad Fite. He was here a couple of months ago. He and Kyle are in a band called The Whisper Mill that is blowing up right now. A few years back Brad was in Afghanistan and the military truck he was riding in rolled over a land mine and blew him up. On the way to the hospital he died three times and had to be revived. That is an amazing origin story don’t you think? I’m pretty sure I’m glad that didn’t happen to me. But if you could say that, it would be awesome. No matter what the conversation was at the dinner party you could trump that. You got a new job. I was blown up by a bomb in Afghanistan. You met Mel Gibson. I died three times. Kyle does Brad do that to you ever? You think you’re having a bad day. I was blown up by a bomb and died three times.

We were dead in our relationship with God. He’s perfect. We are not. He’s worthy. We’re not worthy. There is no reason why a perfect God would want to be with people like us who yell at their kids and text on the freeway and try to sneak 12 items into the express line at Vons. Paul calls us dead.

2) We followed the ways of the world

We know alcohol can be dangerous but our world peddles it hard and fast at a clip of 2 billion a year. It also sells us sex. One study shows that 27% of advertising is using sex to advertise. What does that do to our culture. What kind of impact does that have on our junior high kids? How does that effect the longevity of marriage? What does that do to woman who are already concerned with their body style?

Amanda Seyfried put it like this. I try not to look in the mirror very much. Nobody’s perfect. Only in Hollywood are people perfect and that’s because they spend thousands of dollars on trainers and diets and surgeries. That’s what we’re made to feel like we’re supposed to look like but if you put it in perspective, there’s nothing realistic about it!

The world will tell you to pursue alcohol, run after sex, seek money above anything, but when people actually do it, they get hammered.

3) We were deserving of wrath

Chad got caught up in a lifestyle of drugs in his teenage years. As I was writing this message I wandered into his office and asked him what people were mad at him when he was going through that period of his life. His answer was simple. Everyone. Friends, family, coworkers, the police, his parole officer. I’m guessing this isn’t the kind of sentence people want to hear about their youth director. “Everyone was mad at him including his parole officer.”

Folks, this is your origin story. This is who we all were. We simply followed the ways of the world. It’s what everyone was doing.

God only reminds us of our origin story so that we can know just how great his love is for us. What makes Abraham Lincoln’s story amazing is where he came from. What astounds us about Oprah is what she had to overcome to get to where she is. We love Spiderman because he started out as little nerdy Peter Parker. You can’t fully understand the love that God has for us until you understand your origin story.

Let me camp on a couple of lines here. He made us alive with Christ even when we were dead in transgressions

1) He made us alive when we were at our worst

That reminds me of a story I heard this last week. Karen Michel, 54, showed up to the box office on Tuesday in hopes that she could snag someone’s unclaimed ticket. When she was rebuffed, Murray noticed Michel, heartbroken, walking away from the box office and decided to pounce. “It was crazy,” Michel said. “Bill walked right by me, grabbed me, and gave me a ticket! I said, ‘Where are we going?’ and he said, ‘You can come sit with me!’” Murray took Michel to his V.I.P. section—sitting six rows behind home plate— and offered her appropriate ballgame snacks. “He kept offering me nachos and drinks,” Michel said, proving that Murray knows the road to a woman’s heart is paved with molten stadium cheese. “It was the funniest thing—we were chattin’ like old friends!” 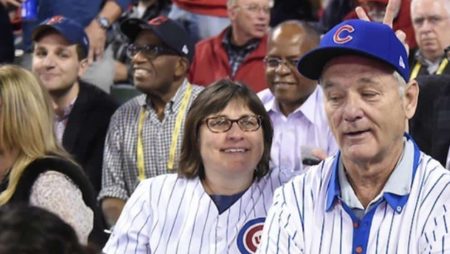 World series seats like Bill Murray had were going as high as $17,000 a seat. Karen Michel could never have afforded a seat. She didn’t deserve it. Couldn’t afford it. But Bill Murray could afford those seats. That’s an amazing story.

3) He includes us in his work in the world

You see that vacant look in my eye. All my pictures looked like that. I have all of my young elementary school pictures here. Let me show you 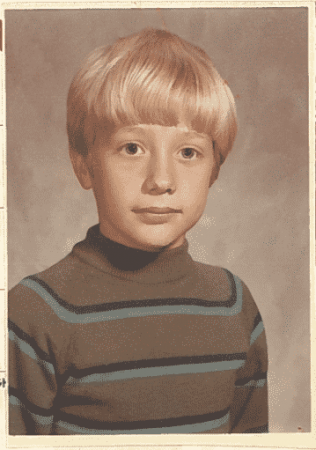 All of my pictures look like that. What’s the best way to describe those. Either I look scared or I look like one of those pioneer pictures taken on the prairie where people have that crazy look in their eyes.

Then when I was 13 my life changed. Jesus entered my life.

It’s funny when I show people pictures like this of me they get embarrassed for me. It’s uncomfortable for them. But I don’t feel that way. I’m okay with it. Because I know that is what I looked like when I was dead. But I’m not dead anymore. God has saved me by his grace.

Let’s go back to that third grade picture. A funny thing happened to me later in life. I was working at this church with high school students and one of the children’s directors at this church was my third grade teacher. She was the teacher I had when that picture was taken. One day she found me and said, “Jack, I cannot even believe that you are the same person.”

You know what? I’m not the same person. I’m a different person. My origin story started off rough, but I have been saved by grace. I have been moved up to a better seat. I have been given mercy that I did not deserve.